Have a child that loves dinosaurs? The Imaginext Ultra T-Rex is large, bony, and extremely fun for making epic primitive adventures. He is loaded with sounds, movements, and adventures and your kids are the ones that make it happen. By turning Power Pads, kids will be able to get him walking, standing, chomping, and launching projectiles and boulders.

What is Imaginext Ultra T-Rex?

When standing at full height this T-Rex is 2 1/1 feet tall, he will get your little dinosaur lover’s imagination going with 3 Power Pads that bring him roaring to life.

He also has two boulder launders in his chest that can be fired at the press of a button and a projectile claw.

Imaginext Ultra T-Rex is intended for children age 36 months to 8 years old and includes the T-Rex, 3 warrior figures with helmets and accessories, 4 boulders, and 4 projectiles. It requires 4 AA batteries that are also included.

What are the Advantages of the Imaginext Ultra T-Rex?

Imaginext Ultra T-Rex will keep your dino lover’s hands and imagination busy. Your child’s hands will be kept busy in many other ways aside from the 3 Power Pads; pushing buttons to launch projectiles or fire boulders, putting figures in the jail, operating the trap door and using the glider.

This scary T-Rex makes no bones about it with his realistic sound effects while he walks and stands firing off projectiles, he is ready to overpower prehistoric lands and the imagination of your dinosaur lover! 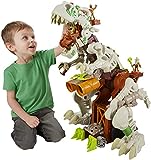 Are there any disadvantages?

Imaginext Ultra T-Rex is a large toy that may not be able to be moved without assistance and could be hard to store. Parents have also mentioned that it doesn’t walk great on carpet. It does also have small pieces that should be kept out of reach of small children due to choking hazard.

Additionally, because the T-Rex is so large it could be scary to some children. Therefore it is not recommended for children who aren’t already really into dinosaurs.

If you have a dinosaur lover this is the toy for them. There are so many ways to play with the Imaginext Ultra T-Rex that your child’s imaginations with really power up. With his ability to walk, make sounds, fire projectiles, and launch boulders this kind of the dinosaurs is sure to overpower any Jurassic enemy as well as all the toys in your dinosaur lover’s collection.

Imaginext Ultra T-Rex will bring your dinosaur hours of fun and adventure conquering the prehistoric lands.

Persil, can small and mighty do the job?