One of the things about being a single mum means one of the most used words is ‘save’ or ‘saved’. Save as in electric, water, petrol, food …I try and save anything that will mean more for my money. But it’s starting to dawn on me that some of this saving is actually turning me a bit green. Now I don’t claim to be a full-blown eco-warrior of the sandals and hippy kind, but if I am saving money and doing a small bit for the planet then it must be good.

I don’t recommend suddenly turning green unless you have plenty of energy and can answer all their questions plus the children might revolt at the idea of sudden change.

The effects on saving on electricity are not only green but saves money too but if you’re on water meter, wasted water is not just wasted water but money down the drain too.

So here I have pulled together some of being a bit greener and saving money along the way.

Change your light bulbs – Only 10 percent of the input power in a traditional light bulb is converted into light. The rest is lost in heat. Lighting a LED bulb is more efficient as I can convert 50 percent of input energy into light.

Use a clothesline – Reduce tumble dryer use with an indoor drying rack or an outside clothesline. Natural drying is better for your clothes, cheaper and doesn’t waste energy.

Take your shoes off – leaving your shoes at the door will cut levels of lead dust in your home by 60per cent. This is due to almost all the lead dust inside our homes comes from the contaminated outdoor soil.

Consider CFL Light bulbs – those funny swirly looking light bulbs may cost more in the first place but they use a quarter of the electricity and last for years. But remember to recycle as they contain small amounts of mercury.

Reuse containers – instead of paying for kitchen storage boxes, reuse old packagings like ice cream containers and such like. Also, try and reuse plastic bags as 3 billion kilograms of the stuff enter the waste stream each year.

Don’t replace, use it up – Its greener to use up what you have first then replacing everything and throwing goods away even if they aren’t eco-friendly.

Use less paper – we go through 900 million trees a year to keep us in the paper. Use both sides of the paper. Don’t print out emails unless vital and try to recycle as much paper products and packaging as possible.

Use a microwave to cook – a microwave is faster and more efficient and will reduce your energy usage by about 75 percent.

Dim the lights. Dimming your lights by 25 or 50 percent with a dimmer switch will save about the same amount in energy.

Put your heating on a timer – No one needs the heat on at night. Set a timer to switch the heating off at bedtime and on again in the morning. It would also save 25 percent of your heating costs and even more in terms of energy.

Don’t buy bottles of water – instead, buy a water filter instead of all those plastic bottles.

Get a home energy audit – Most utility providers will do one for free. You will then know how green you are or aren’t.

Recycle all your drink cans – the energy saved by recycling one can run a television for three hours.

Don’t charge your mobile phone overnight– most phones only take an hour to charge. So charging it all night is drawing wasted energy.

Switch your DVD off standby– Eighty-five percent of the energy used by a DVD player is wasted when it’s on standby.

Use rechargeable batteries – Six hundred million batteries are used in the UK alone every year – most end up as toxic components of the landfill.

Reuse plastic bags – we use over 500 billion plastic bags every year (that’s a million a minute) It will take over a millennium for these to degrade.

Open your windows – by airing your house when it’s chilly outside you will get rid of some of those VOC’s. Turning off the air conditioning will not only save energy but money too.

Only use your washing machine when it is full. With 90 percent of households having a washing machine and using 50 – 120 liters a cycle it’s a lot of water used. You can save water by only switch it on when you have a full load. By using a 30-degree wash setting it will save energy but will also get your clothes just as a clean as a 40-degree wash. When your machine does give up the ghost then replace it with an energy saving mode that allows you to run shorter cycles. There is always the washboard and mangle but I wouldn’t expect any mum to resort to that.

When you’re brushing your teeth turn the tap off. It doesn’t need to run the whole time and your literally throwing away 8,100 liters a year.

Showers are famously quicker and use less water than baths. Showers use 35 liters whereas a bath uses 80 liters. Power showers though use about 80 liters.

Flush less often. Obviously, flush what needs to be flushed but the average house flushes 50 liters of water down the toilet every day. Next time you only blow your nose then flush the tissue down the toilet, think before you flush it.

Collect rainwater. We get enough of it that if you only used the collected water for plants and the garden at least you have saved some. You only need a water butt in your garden to collect water from the downpipe.

Think before tip. The half-filled glasses of water you tip down the sink every day could be saved in the fridge for later or used for watering the plants.

If you regularly run the tap to get cold water for drinks, fill a jug and put it in the fridge.

Turn your thermostat down on your hot water. Does it really have to be that hot? Turning the thermostat down will save energy and if you don’t spend so long in a hot steamy shower you have saved water too.

How to Live Plastic Free: a day in the life of a plastic detox
Buy on Amazon

Recycling Things to Make and Do (Usborne Activities)
£4.99
Buy on Amazon 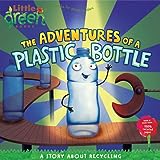 The Adventures of a Plastic Bottle: A Story about Recycling (Little Green Books)
£3.99
Buy on Amazon
Sale

Rubbish and Recycling (See Inside)
£9.18
Buy on Amazon 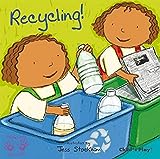 Peppa Pig: Recycling Fun - Read it yourself with Ladybird: Level 1
£4.99
Buy on Amazon

Being Slightly Green Saves the Pennies Too.

Save Money via Your Fridge

Gnome You're The Bomb Tags

You can change the ballons for any age